The Power Inside the Park Theater

In less than a week, the Park Theater will officially open its doors for the first time at the Park MGM resort, as Stevie Nicks and the Pretenders hit the stage for a classic rock double-bill on December 17. However, the newest concert venue in Las Vegas is already getting plenty of attention for a high-tech array of features.

The Park Theater can generally hold 5,200 people, although that number can go up or down, depending on the seating configuration. However, every seat will have strong sightlines and crystal clear sound. In fact, the back row is only about 147 feet away from the stage, making even the worst seat in the house a great one. Everyone will be able to hear every note of music perfectly, as the sound system by L'Acoustics was specially designed and tuned for the theater.

The stage itself will be framed by 50 foot tall projection screens that also cross over the top, serving as a blank canvas for images that may include custom made designs, video, or a live feed of the artist on stage. There is also an 80 foot long LED screen on the back of the stage that can be expanded to cover the entire back wall. There are seven high-definition and two 4K projectors to provide an immersive experience that can in some cases, produce a 3D-like effect. 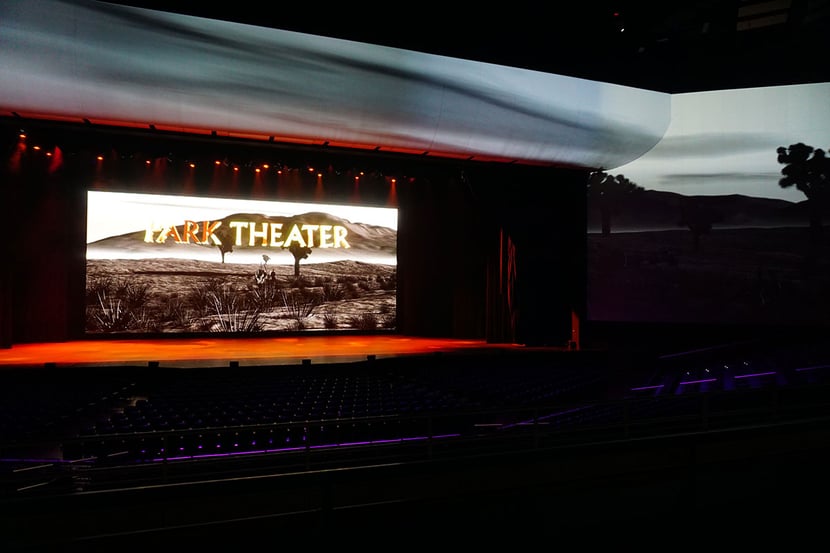 MGM Resorts International invested $100 million into the Park Theater, since the gaming company didn't have its own mid-size entertainment venue on the Strip. Extended engagements with Bruno Mars, Cher and Ricky Martin have already been announced with more big names to come. But the venue will also be able to host sporting events, with layouts already designed for both basketball and mixed martial arts events like the UFC. The Park Theater can be utilized for banquets, seminars, trade shows and exhibits as well.

Despite its impressive features, the Park Theater is only a small piece of a much bigger puzzle. It's the first of many renovations to come for the Park MGM in 2017. The resort will eventually be converted into the Park MGM hotel with some of the tops floors serving as the NoMad boutique hotel-within-a-hotel. Work is expected to wrap up in 2018.

Fly into Las Vegas for New Year's Eve where Bruno Mars will headline the Park Theater to celebrate. It's the perfect way to welcome 2017 in style. Call Cirrus Aviation at (702) 472-9714 to book your flight and secure tickets today. Make sure to download our guide to the top Las Vegas penthouses below. We'll book your flight, hotel accommodation and Park Theatre tickets all together.