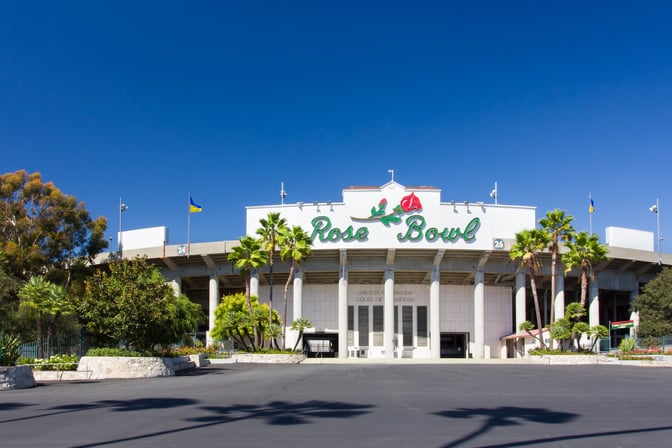 When you charter a private jet to Southern California, make plans to arrive in Pasadena for the Rose Parade and the Rose Bowl game. Together, the events are referred to as “America's New Year Celebration” and the first exciting sports-related event of the year.

Charter a Private Jet to Southern California for the Parade

January 1, 2018 falls on a Monday, which means the parade and bowl game will indeed take place on New Year's Day. If January 1 happens to fall on a Sunday, the events are rescheduled to follow a “never on Sunday” rule – established in 1893 so tolling church bells wouldn't frighten tethered horses.

Today the Rose Parade – also known as the Tournament of Roses Parade – draws a huge audience. Nearly 50 million Americans get up early to watch the parade step off in downtown Pasadena at 8:00 a.m. PST. When viewers around the world are tallied, more people actually tune in to watch the parade than the game that follows.

Even better is watching the two-hour parade in person from the stands. You're virtually guaranteed a great view since the leisurely 2.5 mph pace helps spectators can see all the floats, equestrians, marching bands and performers in their full colorful grandeur.

Charter a Private Jet to Southern California for the Game

Following the parade, the Rose Bowl game gets underway at 1:00 p.m., pitting the No. 2-ranked Oklahoma Sooners against the No. 3-ranked Georgia Bulldogs. The Rose Bowl game is called the “granddaddy” of collegiate bowl games for a reason. It's the oldest of the bowls – with the first game taking place in 1902 – and has established many “firsts” that include:

Charter a Private Jet to Southern California and Travel in Style

After securing tickets to the events, call Cirrus Aviation at 702-472-9714 to book a jet that best suits your party and purposes. If needed, a company representative may be able to secure Rose Bowl tickets through our concierge services. Charter a private jet to Southern California and kick off the new year in style!